Idling away in college canteen, playing pranks and games with wonderful buddies, bunking classes to relish the latest movies are some of the activities which define our college life. And no matter how far we go in life, we will always reminisce our college days.

Prankster, Gurgaon is one such place which will take you back to those wonderful times when life was fun and free. They have a section which will remind you of your Chemistry lab – complete with petri dishes, flasks, jars and individual wash basins on each table, a library having tons of academic books and Oxford dictionaries, with small study lamps on each table, a class room with a black board as well as an amphitheater, a college hostel section with bunk beds, a college canteen section with the specials written and a parking lot with a Chinese van selling exclusively the Chinese delicacies where you can sit on vehicle-cum seating chairs and tables. 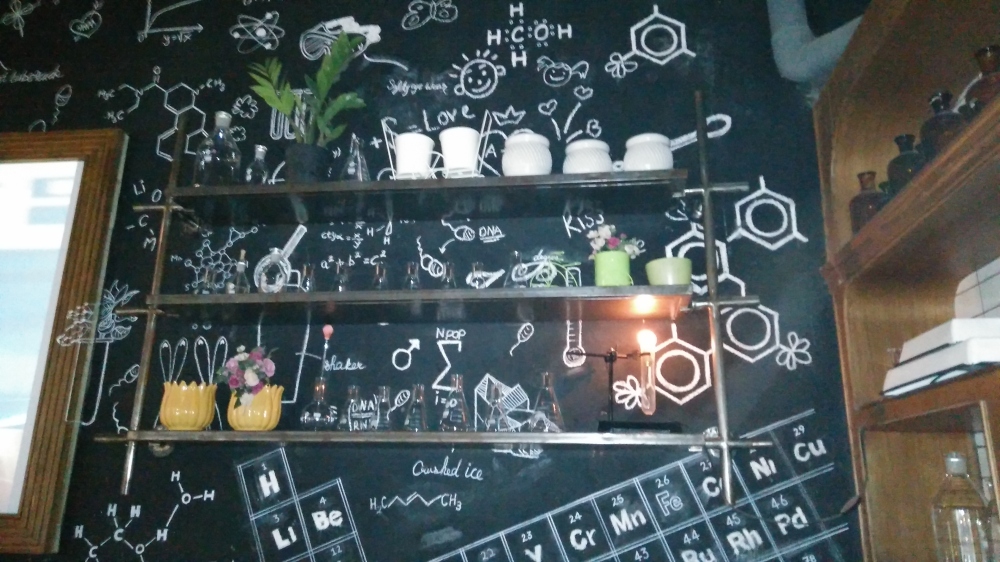 The feel of this place is so amazing and the dishes – more amazing than you thought. The dishes are available at competitive prices, thereby not burning a hole in your pockets. Their house brewed beer is kickass in taste as well in price (no pun intended). And the staff delights you with its swift service.

Moving on to the delicacies available here, let us explore the “progressive nostalgic” cuisine served at Prankster :

Lotus root Fritters: Finger food has been evolving gradually and these crispy fritters made out of lotus root could be the next “it” food! The crunch you get while binging on them is inexplicable and the tangy and spicy flavours are like cherries on a cake. RECOMMENDED. 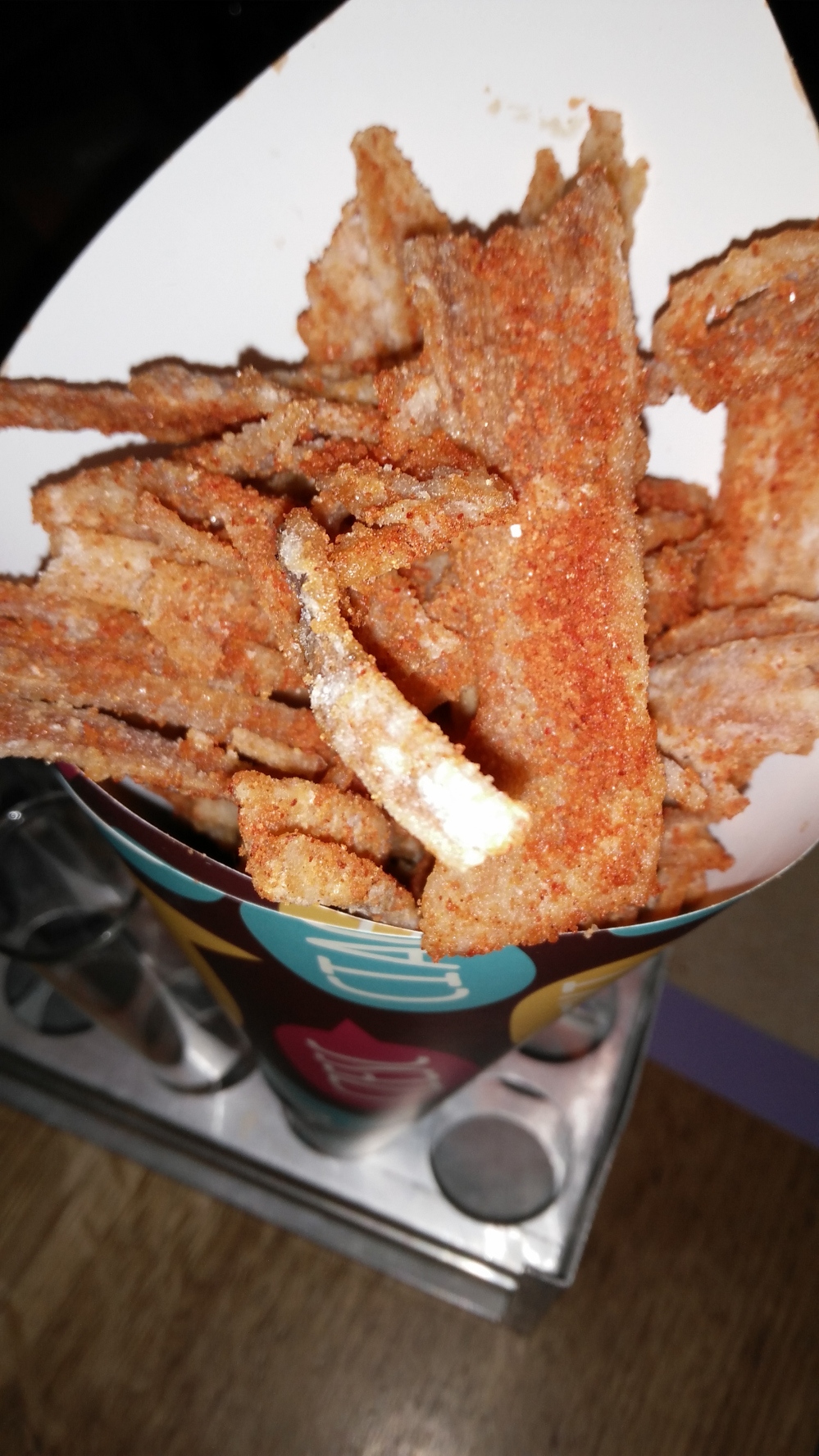 Dahi Bhalla ice cream with roomali roti crisps: Fancy having the usual dah Bhalla in a reinvented avatar? Because the dahi halla served here is in the form of ice cream – yes, you read this correctly. The dahi Bhalla is grounded into a fine paste and made into ice creams and served with green and red chutneys, pomegranate seeds and finely fried crisps of roomali roti. The ice cream has a very delicate sweet and soft texture. 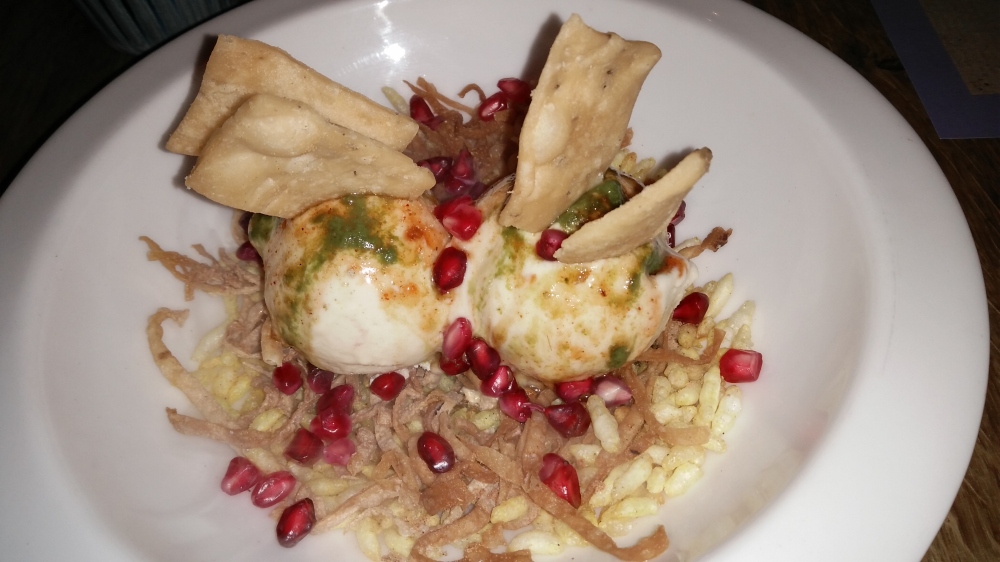 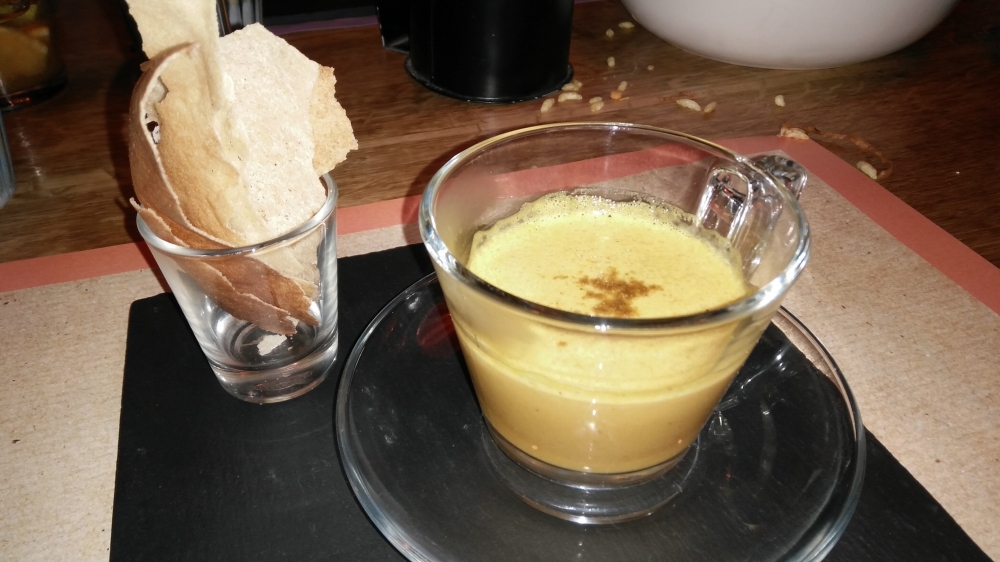 Pav Bhaajhi Zinger: So the Marathi Pav Bhaajhi is presented as a game – each zinger is covered by a Rubic’s cube box and the one who picks up an empty box has to play truth or dare. Interesting? Moving on to the zinger, the patty is made from a well cooked hot bhaajhi, which is crispy from the outside and soft and mushy from the inside. They are sandwiched between fine slices of onion, tomato and cheese with soft, buttered buns enclosing them. The occasional bite of cumin seeds in the patty will give you a major food gasm. And the buns are made in house. 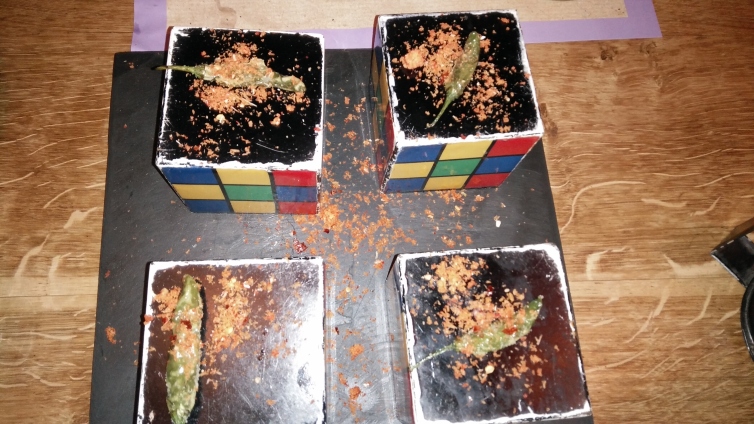 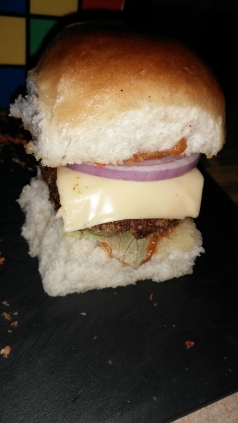 Chicken Tikka Fattirs: This is the Indian take on an Egyptian Pizza called Fattirs. Fattir is a layered pizza which is flaky – textured like a puff pastry. The pizza is light and the warm melted cheese is spread on the former in a very thin layer. The chicken tikka is pretty prominent here and while having this, you feel you are having the actual chicken tikka. 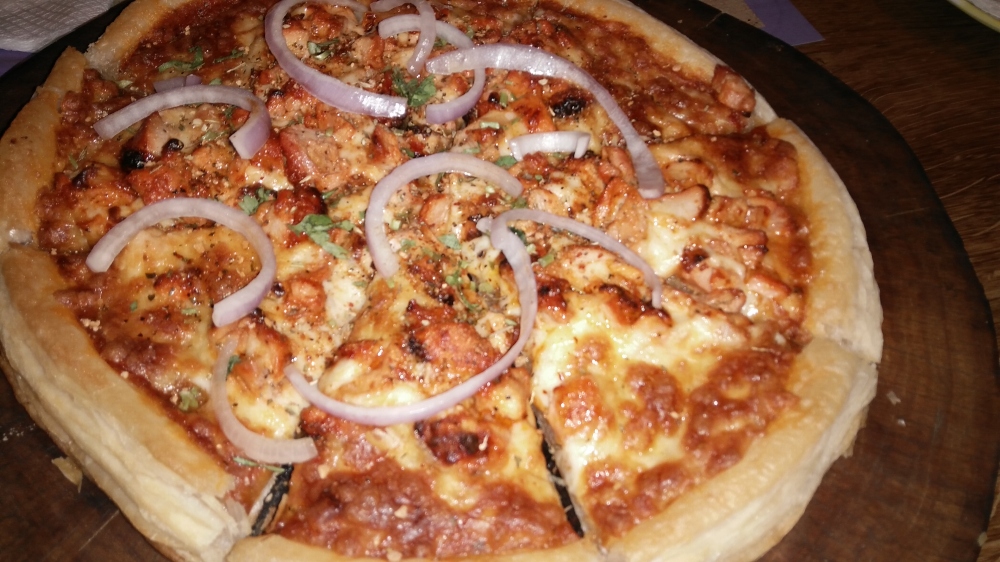 Imli glazed Kung Pao with imli goli: So initially, you gobble up the imli goli or balls and then you eat the pung pao chicken which is heavenly soft and chewy and has a slightly tangy flavour because of tamarind. 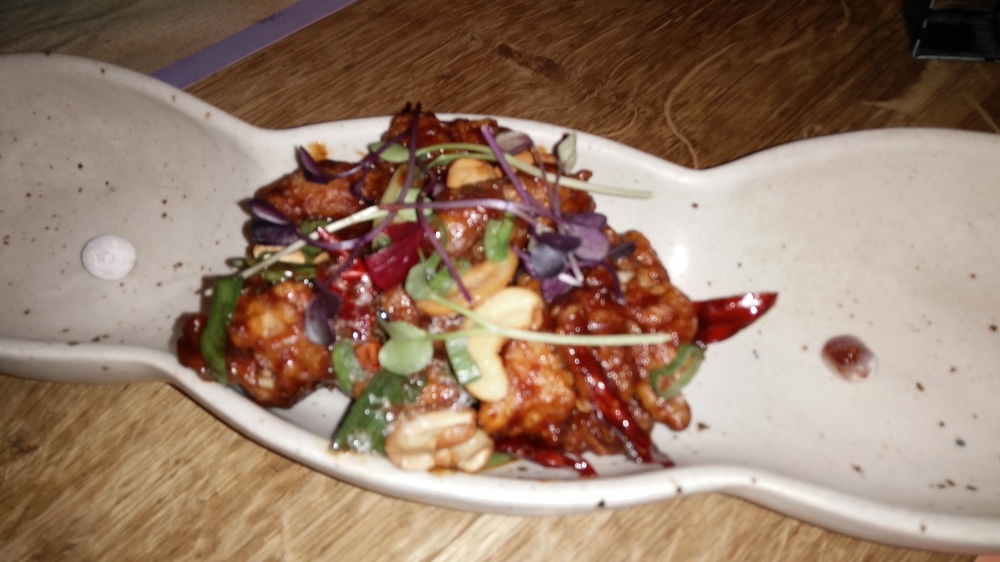 Tender Tandoori Lamb Chops: This has to be the best one of the incredible dishes presented here. The lamb is slow cooked and has a fibrous, soft and chewy texture. It is so excellently cooked that the meat comes clean off from the bones. The crust is delicately crispy from the outside. 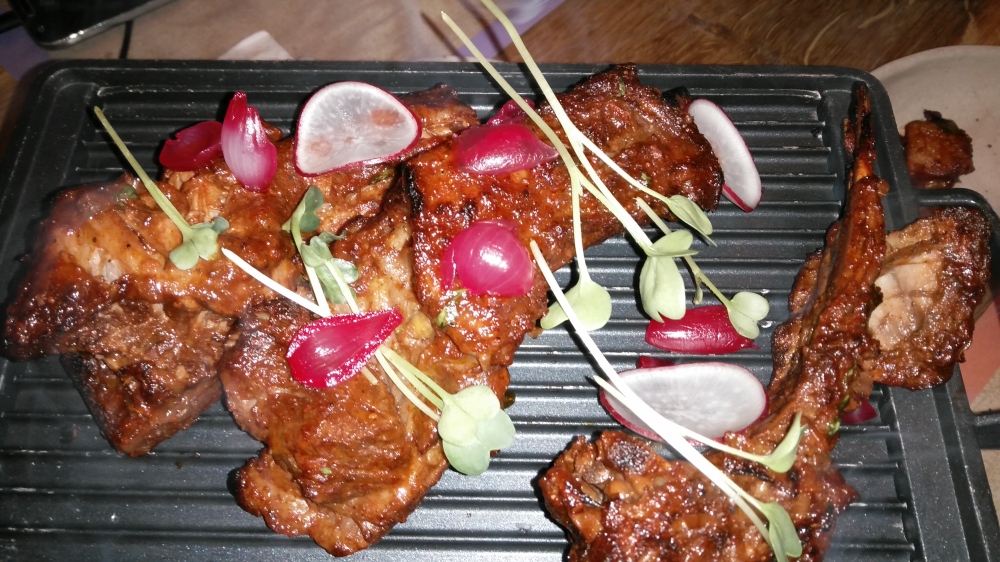 Rampuri mutton: Rampur is a place near Lucknow, known for its spicy dishes and the Rampuri mutton was no different. The mutton is tender and juicy and is drenched in a thick gravy which reeks of garam masala. 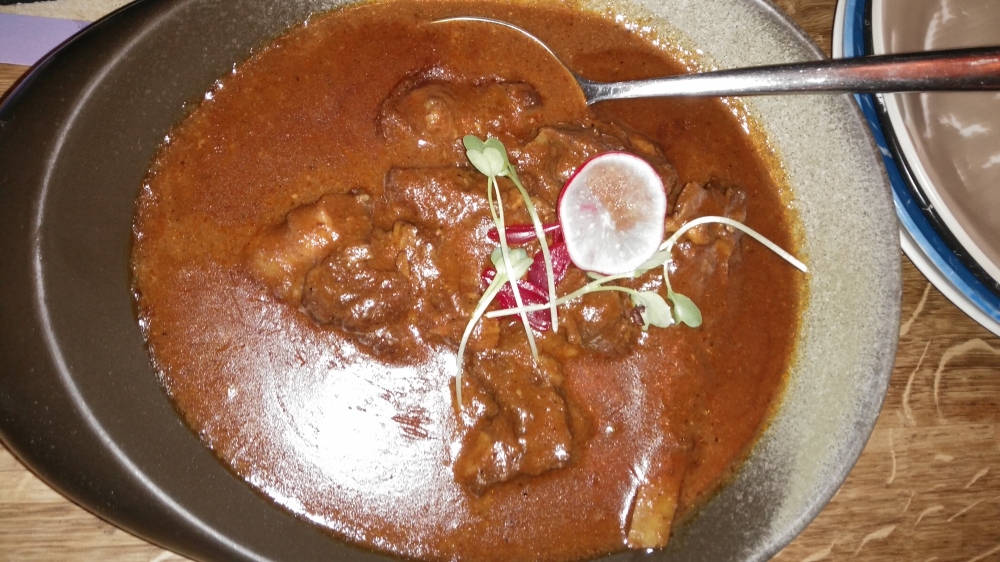 Hand pulled butter chicken: The myriad flavours presented in this dish will transform you to a wonderland. The tomato based gravy with prominence of cumin and yoghurt is lovely to have and the chicken is pretty chewy and juicy.

Paneer barrels makhni: The cottage cheese is made in the form of barrels which are topped on a thick makhni gravy with flavours of lemongrass and coconut. The paneer is divinely soft and the gravy is rich in flavours. 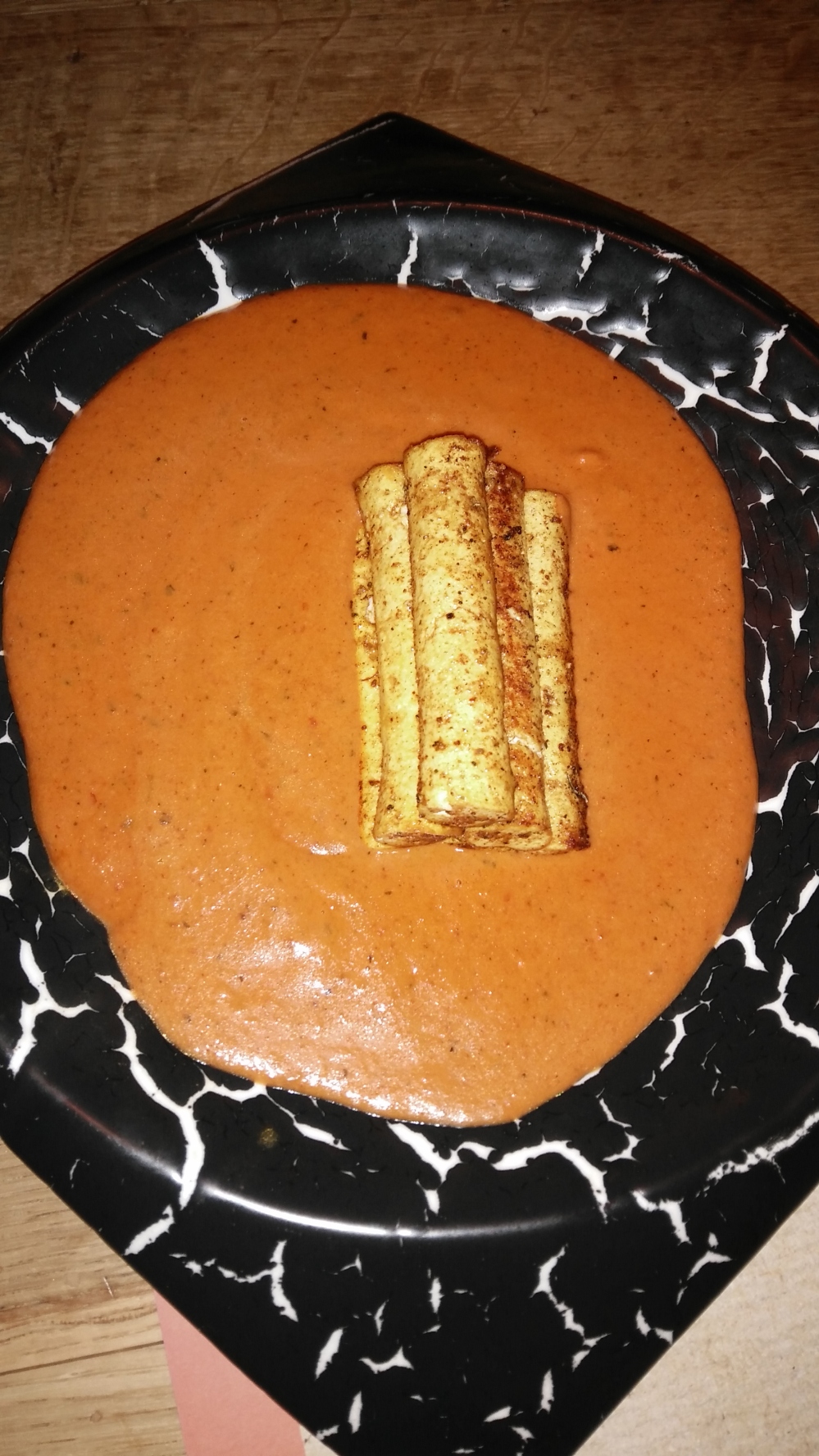 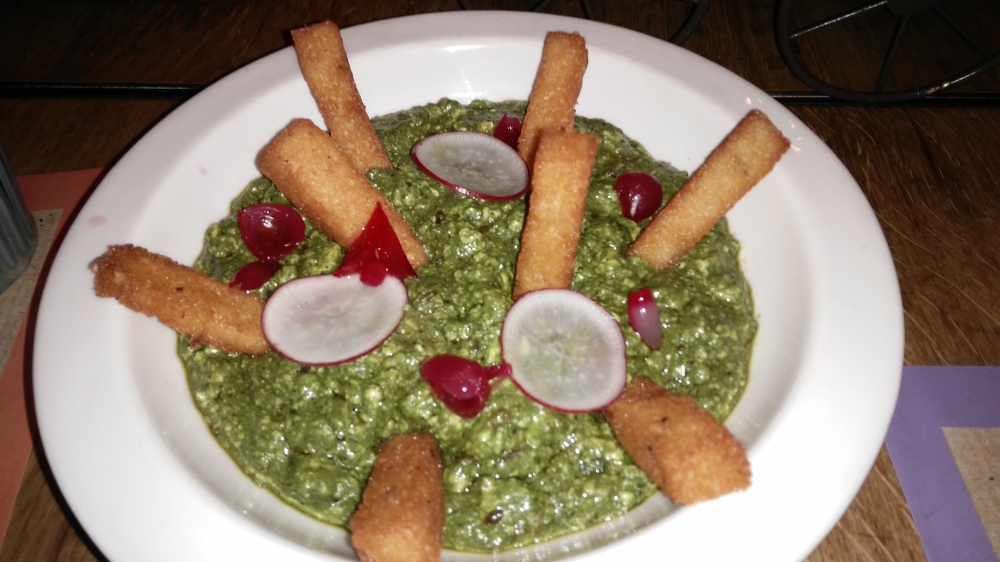 Litchi Kebab: Man, are these the ultimate kebabs the vegetarians have been yearning for? Because these were legendary! The litchi skin was stuffed with khoya and topped with grounded pistachios. The kebabs were warm, lusciously soft and sweet. 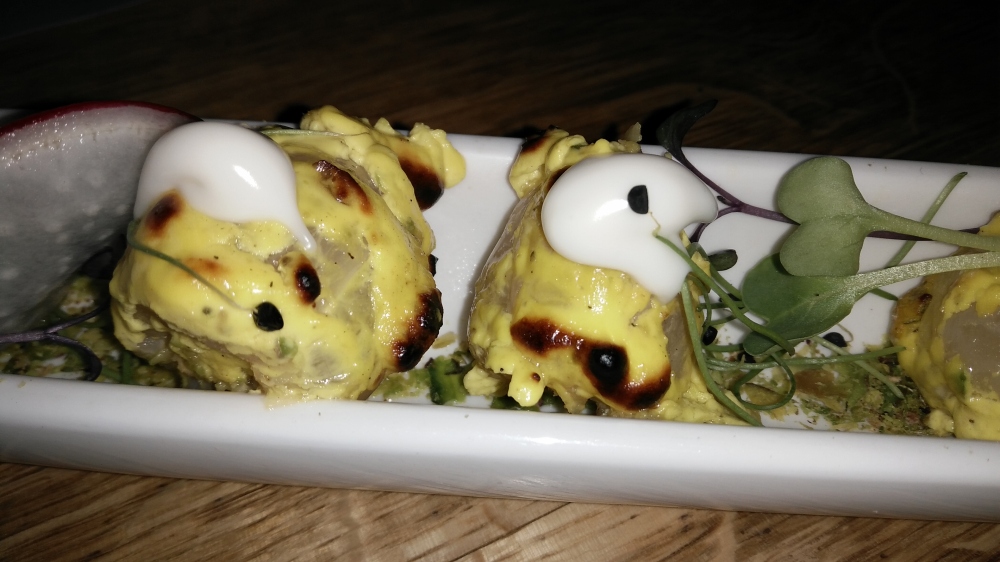 Rose Kheer: For a rose lover, this dessert will be paradisiacal. The usual kheer is garnished with finely sliced pistachios, almond flakes and two fresh red roses that are nitrogen cooled. The kheer has got a thick consistency with luxuriant malai enriching it. The addition of green cardamom appends further flavours to this wonderfully made dessert.

Deconstructed Christmas Cake: Deconstruction of dishes is very much in these days and deconstructed desserts rule the roost. And with Christmas around the corner, who doesn’t want to eat the deconstructed rum cakes? So a cream flavoured with cinnamon is sprayed on a mixture of eggless brownies and grapes and garnished with tutti-frutti, choco chips, orange peel and cinnamon. This whole setup is done on an edible chocolate plate. Such myriad flavours and heavenly taste! 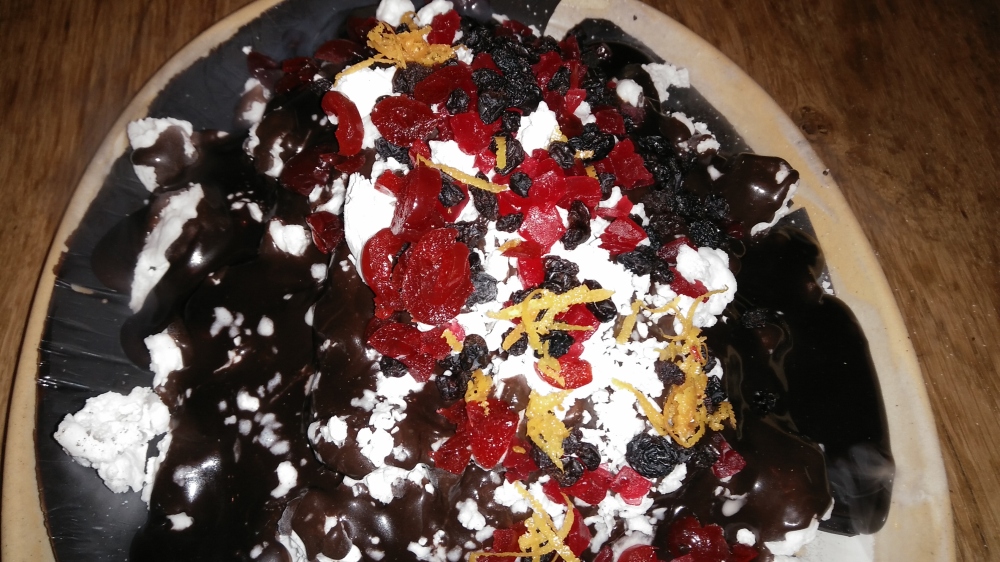