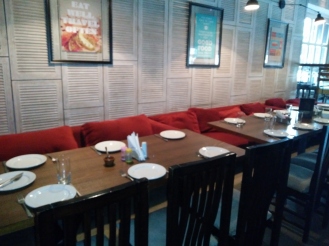 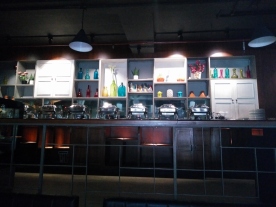 Think of a restaurant serving the best of global dishes in their buffet menu and just wish that the buffet is optimally priced. Well, well, this is not a dream but a reality because the Global Food Factory at Rajouri Garden is here to entice with its array of dishes from the various parts of the world.

The best part about them is that they serve the dishes made from fresh ingredients. To top it all, the dishes are not half cooked as is the norm in other restaurants. The items are prepared from the scratch as soon as the order is placed. The servers here are very courteous and they serve the food with love. But the service is a bit slow because of the dishes being prepared from zero.

Here are the items I tried :

Exotic Veg Burrito Bowl : I am not a big fan of burritos so did not like this one much. The well cooked and spiced rice had a gravy on top and was served with tomato salsa and sour cream. The tomato salsa was too good – tangy and mildly flavoured with the freshness of tomatoes adding their own charm.

Wood fired Italian veg pizza : Loved it to the core. Thin crust pizza with fresh fluffy cheese and jullienes of colourful bell peppers, mushrooms and broccoli. The pizza was subtle flavoured and was way too good. The base was not burned which was a novelty.

Wood fired Turkish Garlic bread : I found them okay. The garlic breads has negligible quantity of garlic though they were topped with chilli flakes and butter.

Gandhiji Paris Paneer Tikka : Average according to me. Not much flavour bit sweet in taste.

Dahi ke kebab : I have had better dahi le kebab before. These were sweet and soft but dry.

Fish lemon butter : Small cakes of fish having crusty exterior and topped with sour buttery sauce. The fish was cooked well but the sauce was way too sour.

English Fish and chips : These guys believe in serving fish and chips without any sauce or dip. We actually had to ask for the dips but they never came. The fish was well made and served hot and fries were way too soft. Not recommended.

Wood fired peri peri chicken pizza : Small chunks of chicken on a bed of fluffy melted cheese and thin crust – this was excellent. It was spicy and the chicken chunks were chewy and good to eat.

Banno kebab : Let us call this a version of Afghani chicken. The boneless chicken pieces were soft but could have been left to grill for some more time. The addition of cream made it good but improvements needed. The cream was not sticking to the chicken pieces as it should.

Mutton seekh kebab : The minced mutton was fine and the spices made it tasty but the kebabs were disintegrating easily. They were not chewy as they are supposed to be.

GFF special chilli chicken : Never had a better version of chilli chicken. The boneless chicken pieces tasted fresh and were way too soft. The spices had penetrated to the insides of the chicken and the accompanying chilli garlic sauce was excellent.

GFF fusion mushroom crepes : Sliced mushrooms enclosed into thin crepes and drenched in melted cheese and red sauce. There was a prominent flavours of black pepper here. I found it way too cheesy.

Bread butter pudding/ Irani bread : Man, these were amazing. The breads loaded with strawberry jam and mashed into a fine dessert. This was served hot and tasted excellent. The subtleness of this dessert is commendable considering the fact that copious amount of jam was used.

Coconut caramel custard : Another fine dessert with a prominent flavour of coconut. But I couldn’t taste caramel in this one. It was served cold and was a bit creamy.

Chocolate mousse: Served in shot glasses, the mousse was good with a crackling layer of dark chocolate covering it.

Mango mousse : What are summers without mango for us Indians? The mango mousse served here was subtle, creamy and perfect.