First of all, thank you to the very talented and resourceful organizers at The Transforming Travels for organizing this unique experience in the midst of nature. Chandni Aggarwal and Mihir Panda, you people deserve a salute!

So how about a calming trip with least use of your digital devices, comfortable stay at a colonial bungalow with wooden interiors, surroundings that speak organic nestled in the lap of Himalayas and amongst gleeful people who share your passion for travel.

We were picked up from Mandi House metro station, Delhi at around 10:30pm in a tempo traveller with flexible chairs that did not give your backs a resounding ache. We departed straight to Haldwani through Hapur with occasional stops in between.

The village in which we were going to stay for the next 1.5 days was an hour and a half drive away from Haldwani and was called Khatauni village. A light shower greeted us at Haldwani with the soothing shade of deciduous trees protecting us from a heavy spell. First time in Haldwani – too good! 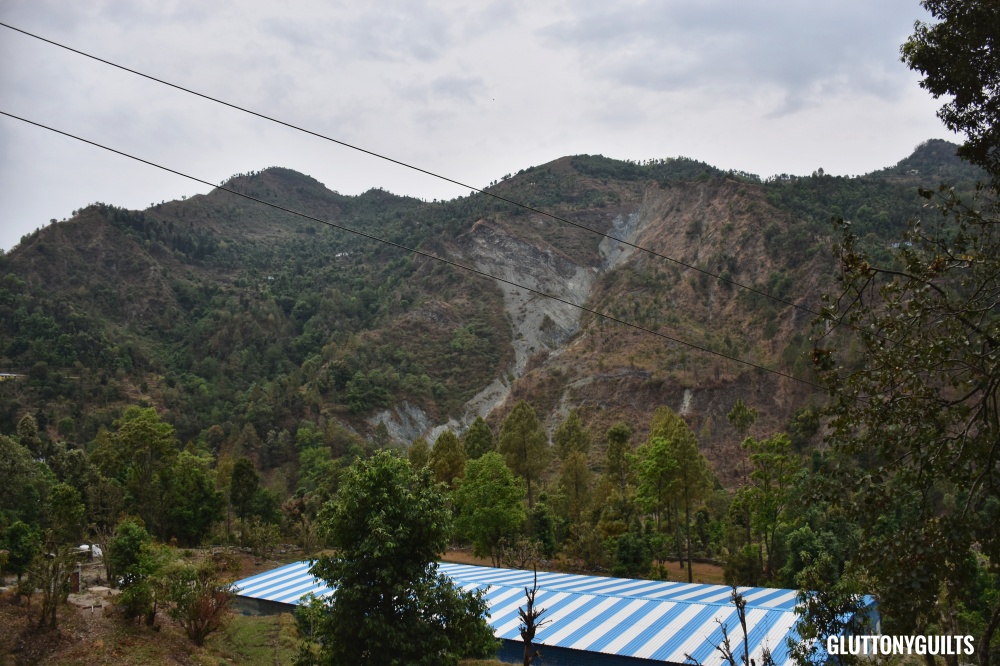 A delicious breakfast followed in the lap of coniferous trees and the wild twittering of birds. How delicious it is to move away for a few days from the city and enjoy a raw unhindered experience of the mountains.

After a few hours rest, we went for a short downhill trek towards the river Kalsa. The dried pine leaves occasionally give you a surprise slip but the pleasant s walk in the shade of the towering flora makes you forget them.

We also saw the organic farms in the vicinity of the resort where organic peas, cauliflower and other vegetables were growing and the workers engaged in their routine work rituals. We were warmly welcomed by the hosts to savour the fresh green peas from the farm and needless, to say, they were sweet and mellow.

The flow of the river Kalsa was moderate but care should be taken while crossing the banks as the rocks are quite slippery. I was slightly careless and slipped quite a few times. In one such incident, my Ray Bans went into the flowing waters and I had to hanker along to get them back from the clutches of Kalsa.

Sitting on the rocks at the Kalsa river is a therapy in itself. The cool environment and the music of the gushing water transforms you into a blissful state.

After returning from our sojourn, we were greeted with a delicious and humble home cooked meal of chappati, masoor dal, sautéed potatoes and okra. All the ingredients are organic and grown in the family’s farm itself. What a joy it is to eat a home cooked meal away from home!

After this delicious lunch, I preferred to sleep in my vintage room for four hours! The cool surroundings with the comfortable environment of high ceiling roof and woody interiors aided in a relaxing nap.

We were greeted with a heavy downpour which lasted two hours. The breakfast was shifted to the indoor wooden dining area while savouring the beautiful Himalayan rainfall.

We geared for our trek to the Karkotak peak while leaving our main luggage behind which would be taken to Bheemtal by our traveller. The trek started after the crossing the Kalsa river and the initial terrain was simple and levelled. Gradually the trail started involving pebbles and dried pine leaves with breath taking views of the surrounding villages and the mountains. 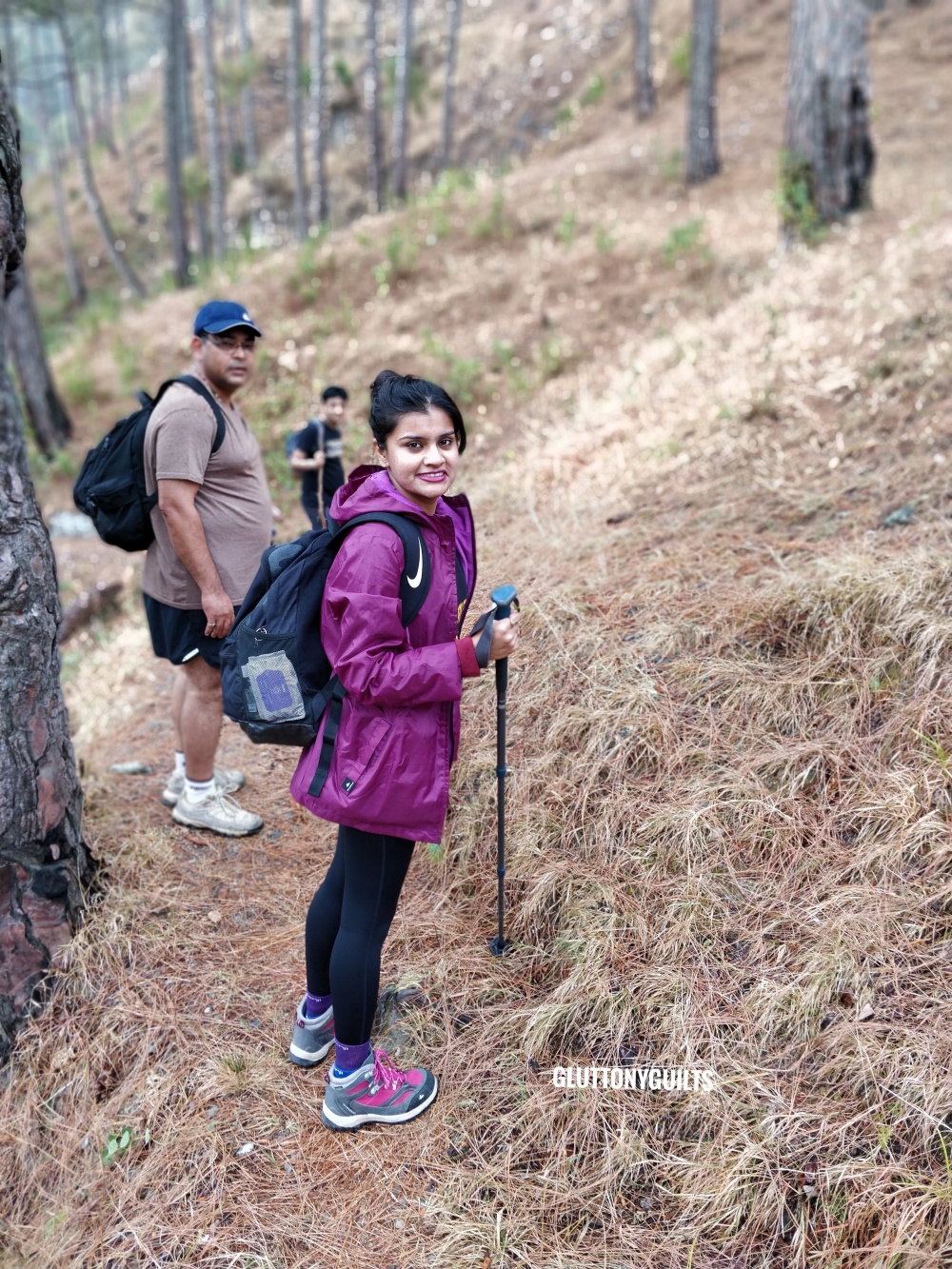 Some views would definitely remind you of those old Bollywood numbers when the protagonists get lost in some coniferous forest.

For me, this easy trek was difficult because of my ankle inflammation and the knee injury sustained a day before. I was always the last one in the group, so at times, it got frustrating. Those 8.5km seemed like a lifetime because of the slower pace of my legs and continuous drizzling but after reaching the peak, those two aspects were readily forgotten.

The Karkotak peak is situated at an elevation of around 1700m and a clear pristine view of the Bheemtal and Nauchekital is clearly visible. You will spot some local kids playing merrily around the temple area and you will slightly wish to be amongst them. 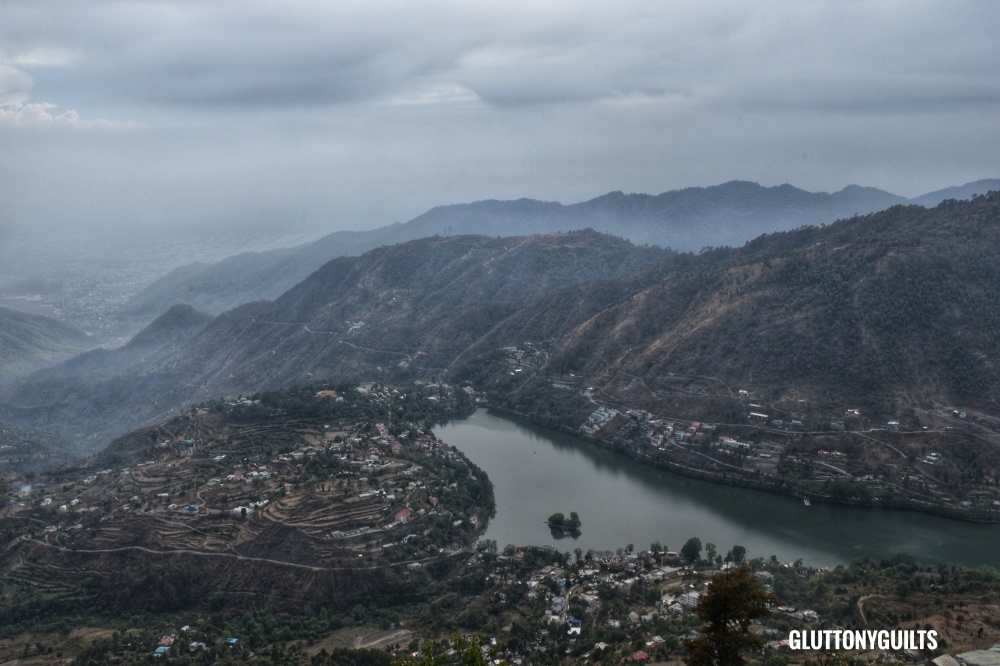 The descent was easier and we met many local villagers there and enjoyed clicking a few pictures in the tall mountain grasses. An hour’s rest at a local guest house and an hour’s hangout at a pub made us forget the tiredness of the trek. 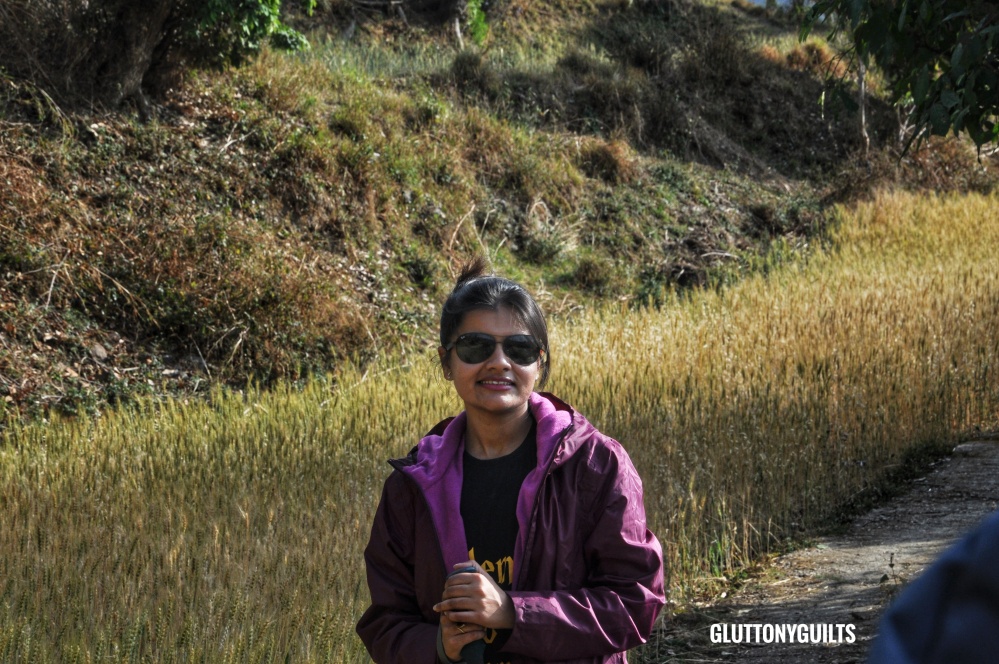 Special thank you to all the fellow travel mates, who made this trip unforgettable.