Paris, the fashion capital, the epicentre of “Liberty, Equality & Fraternity” and whose streets are filled with aroma of freshly baked French delicacies, was always on my must travel list. Parisian fashion, French cuisine and way of life are some of favourite pins on Pinterest.

So when I had planned for my business travel to Germany, Paris became my weekend escapade. I was staying in Mulheim, Germany, and since there is no direct conveyance from Mulheim to Paris, I booked a Flixtrain to Essen and a Flixbus from Essen to Paris.

The Flixbus is a cheap (read 30 Euros) way of travelling from one city to another in Europe. The train has in-built washroom, complimentary WiFi and charging points on each seat. The seats are pretty comfortable for an overnight journey.

So I boarded my Flixbus to Paris at 10pm and enjoyed the sleep. We reached Paris at around 6:15 in the morning at the Berci Siene bus station. I believe this is the main bus station where all the inter country buses are parked.

The journey from Bercy Siene to my hotel Ibis in Porte’ D’Italie was a nightmare! I used google to locate the nearest metro station which was around a km walk from the bus station. And I was carrying a two wheeler trolley bag, laptop bag and a handbag all the way! I finally reached the Bercy metro station and bought a ticket to Porte’ D’Italie on the recommendation of the help desk personnel. He advised me to look after my pockets because of robbers and muggers. The metro system at Paris is about a hundred years old, so do not expect any sleek and plush coaches as the ones in our Delhi metro.

The journey was again harrowing because I had to get down at a station because of a bifurcated route and I did not. Imagine carrying all that luggage up and down the stairs because the escalators aren’t two way.

When I finally got out of the Porte’ D’Italie station, I had no clue where Ibis was. Google maps was showing a 10 minute walk and so I followed and that was the mistake I did that day. I kept following the route which went on the right side of a highway and my hotel was on the left side of the other lane. When I realised my sheer stupidity, I called an Uber and I believe he wasn’t able to understand my location because it was on a pavement in the middle of a highway! He cancelled the trip and my 6 Euros went down the drain. I retraced my steps and went back to a location where a cab will be able to locate me. A new cab finally arrived and took me to my hotel. The whole process from Bercy Seine to Ibis took 1.5 hours.

The staff at Ibis were very warm though I had to shell out a few Euros to get my room at 8:30 in the morning because the check out time is 12pm. My back was in a bad shape so I sank into the plush beds and slept peacefully till 10am.

One of my friends advised me to download City Mappe – a very convenient app which shows the myriad routes available from any location to the preferred destination. My priority was to get to a place where I can eat (I was hungry since the night) and shop for French goodies.

I got all decked up to look like a Parisian so that I don’t get mugged. The front desk lady at Ibis helped me a lot in what to shop and advised me to walk till the Gentilly metro station and take a metro till Chatelet Les-Halles – a huge mall where I’ll be able to fulfill my priorities. The weather was not cold but I carried my over coat and had to wear it inside out so that my pockets aren’t visible to the potential robbers. I was slightly scared the whole time because the streets were deserted. But the metro was pretty darn crowded. I was not able to buy tickets initially but a Chinese girl who was well versed in English helped me.

It took half an hour to reach Chatelet Les-Halles metro station and the mall is situated just adjacent to it. Thankfully, the signs are also in English so you won’t have much trouble navigating through the mall.

My stomach was playing hunger games with me, so I decided to have a vegetarian subway filled with fresh basil pesto and warm cheese from Le’ Brioche Doree. Then a Mc Cafe store enticed me with its apple pie. I also went to a boulangerie by the name of Gagao and had a delicious Belgian waffle there. 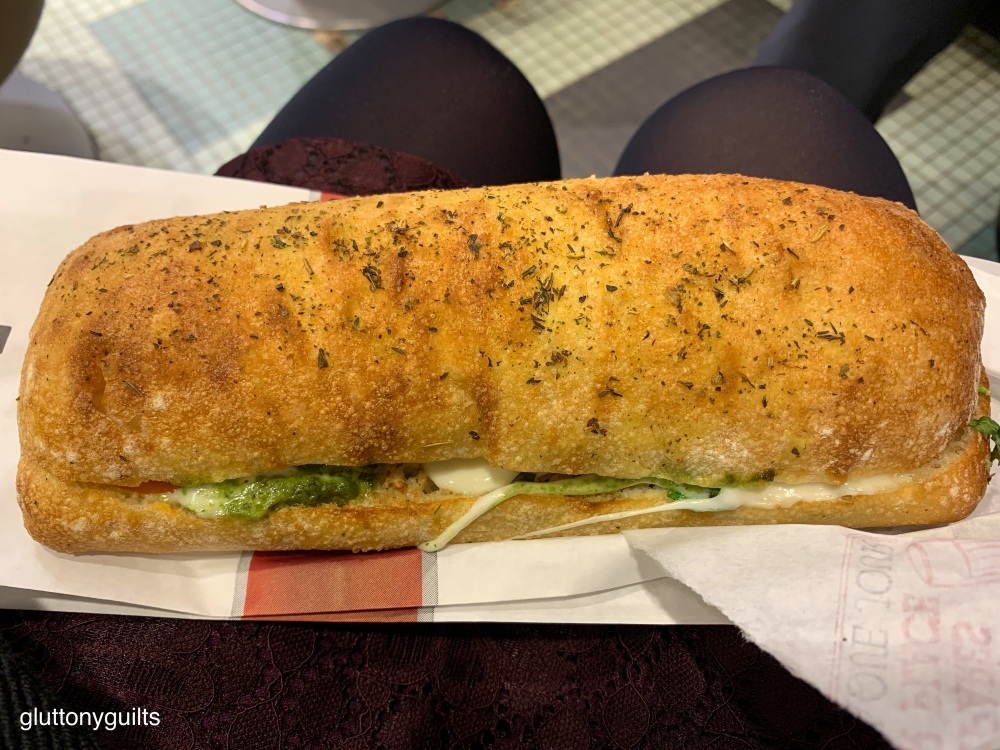 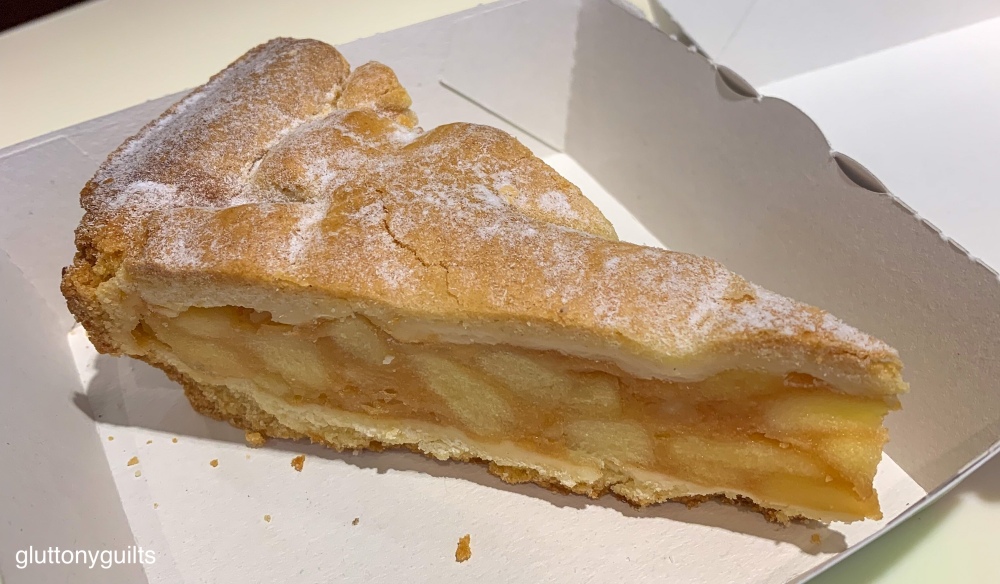 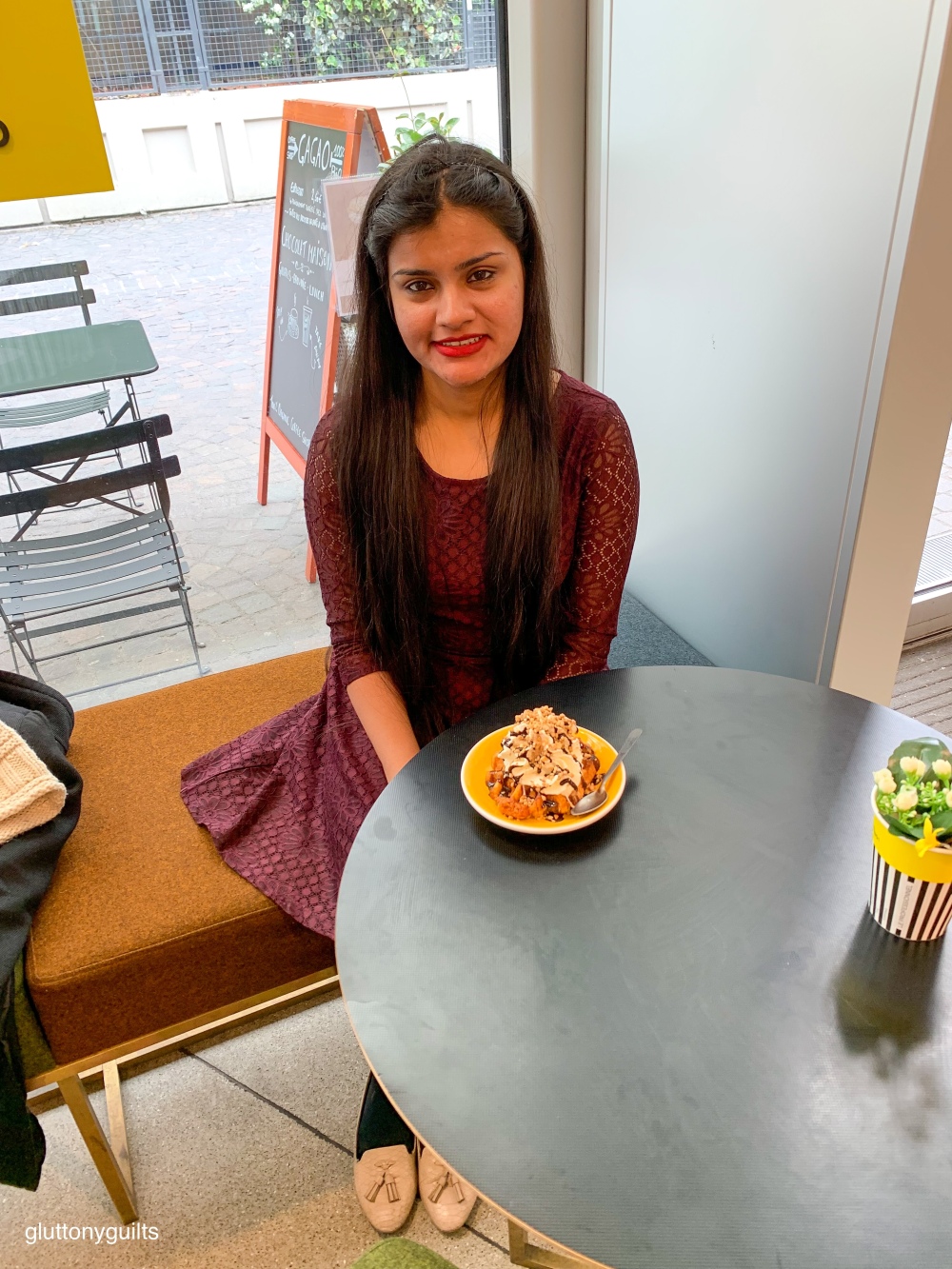 The hunger game was finally won, so the shopping escapade started. I bought a few chocolates from Hema and then went into the Adopt Perfume store. French perfumery has always intrigued me and my quest for long staying and classy perfumes finally brought me here. The attendants are affluent in English so one of them guided me on the plethora of notes being used in Adopt. There was a store discount going on so I brought a box of 7 French perfumes (30ml) for 45€ and a red lipstick for my sister.

It is easier to interact with the locals if you genuinely use the French words – “Bonjour”, “Merci” and so on. The French will also make an effort to help if you respect their culture.

I decided to return back to my hotel and rest for a while. I wished to visit the Eiffel Tower and Arc De Tromphe but the confusing metro system and the lack of English speaking Uber drivers compelled me to stay close to my hotel and explore the nearby areas. 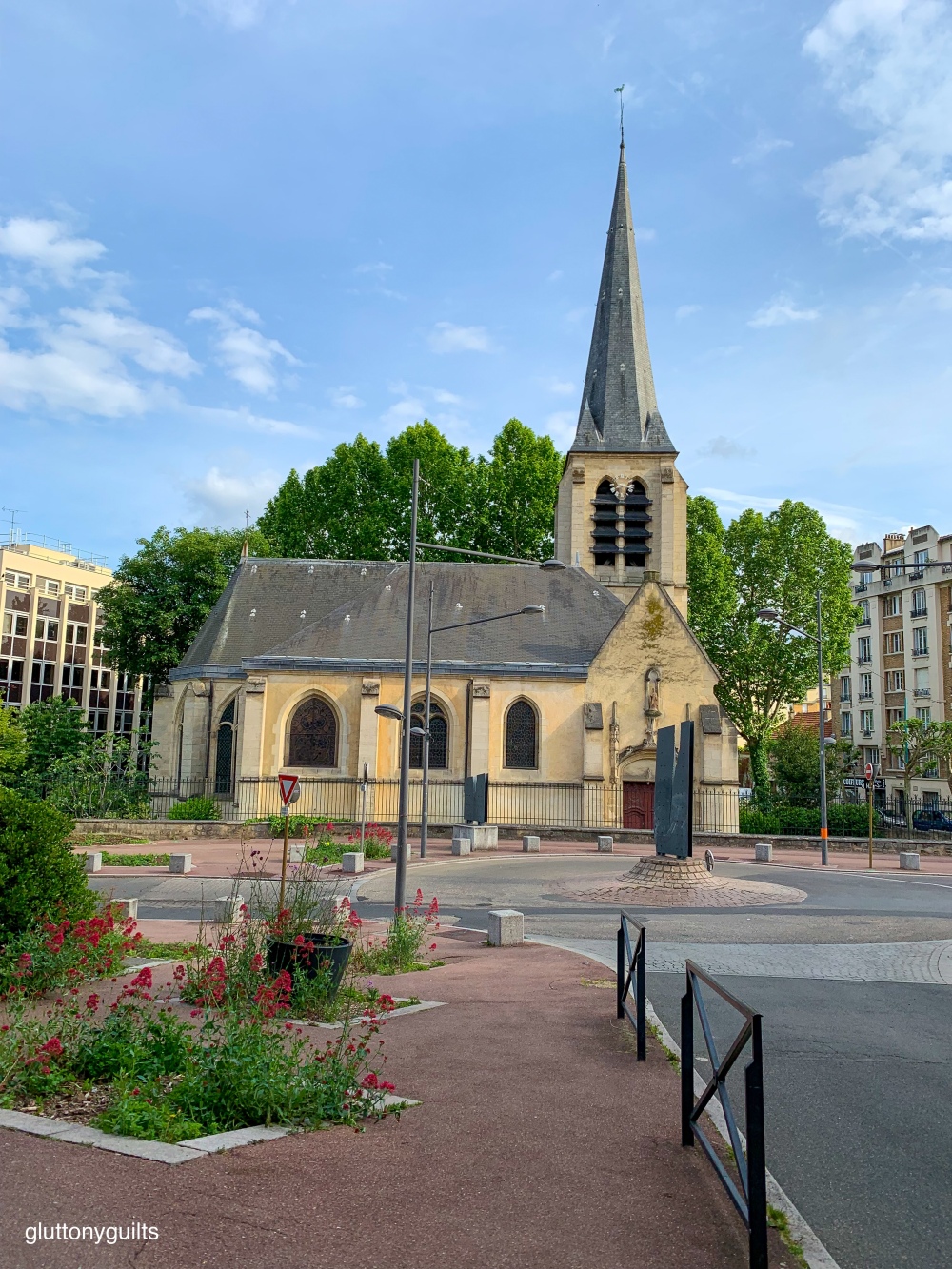 After ample resting, I decided to explore the streets around my hotel. There was a church nearby where a wedding was taking place. Although the surroundings were pretty but I had to keep a look out for muggers and remember my steps back to the hotel. I boarded an N15 bus from Mairie De Gentilly bus station and arrived at Le Kremlin Bicentre street where a host of restaurants are situated. I zeroed in on Le Plaza and had a mushroom-ham Pizza (man it was huge) and a glass of Merlot. The restaurant staff were very warm and I was asked by a few Parisian ladies to join them as I was gobbling the pizza alone. 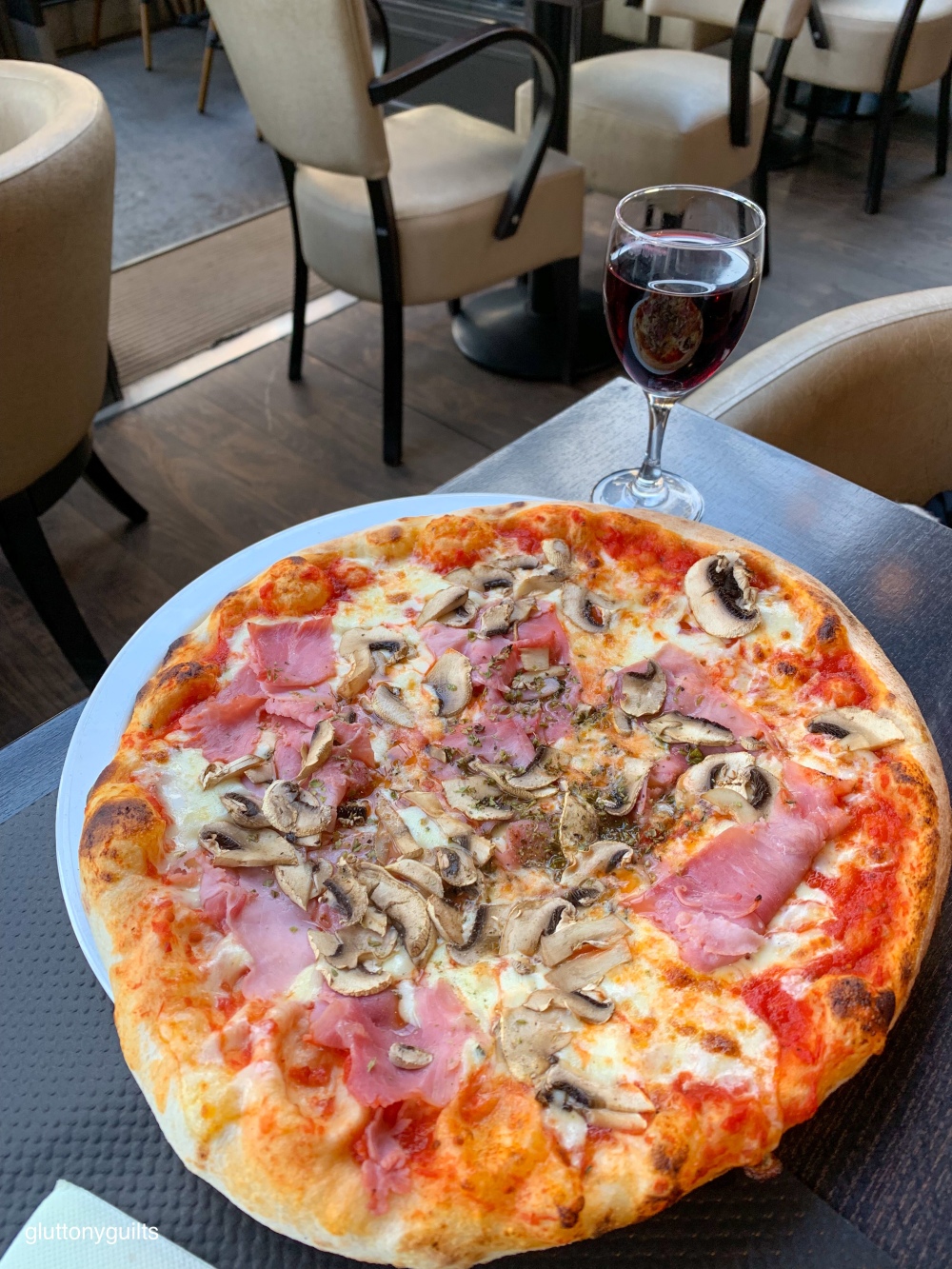 It was 7:30pm and the sun was still up but I was scared of another harrowing journey so I decided to return back to my hotel and read a book.

I was greeted with a lovely buffet spread the next morning at the hotel restaurant. Warm French crepes, Nutella spreads, freshly baked muffins, sweet patty, croissant cheese and flavoured yogurt – in the words of Chandler Bing, could it be any better? 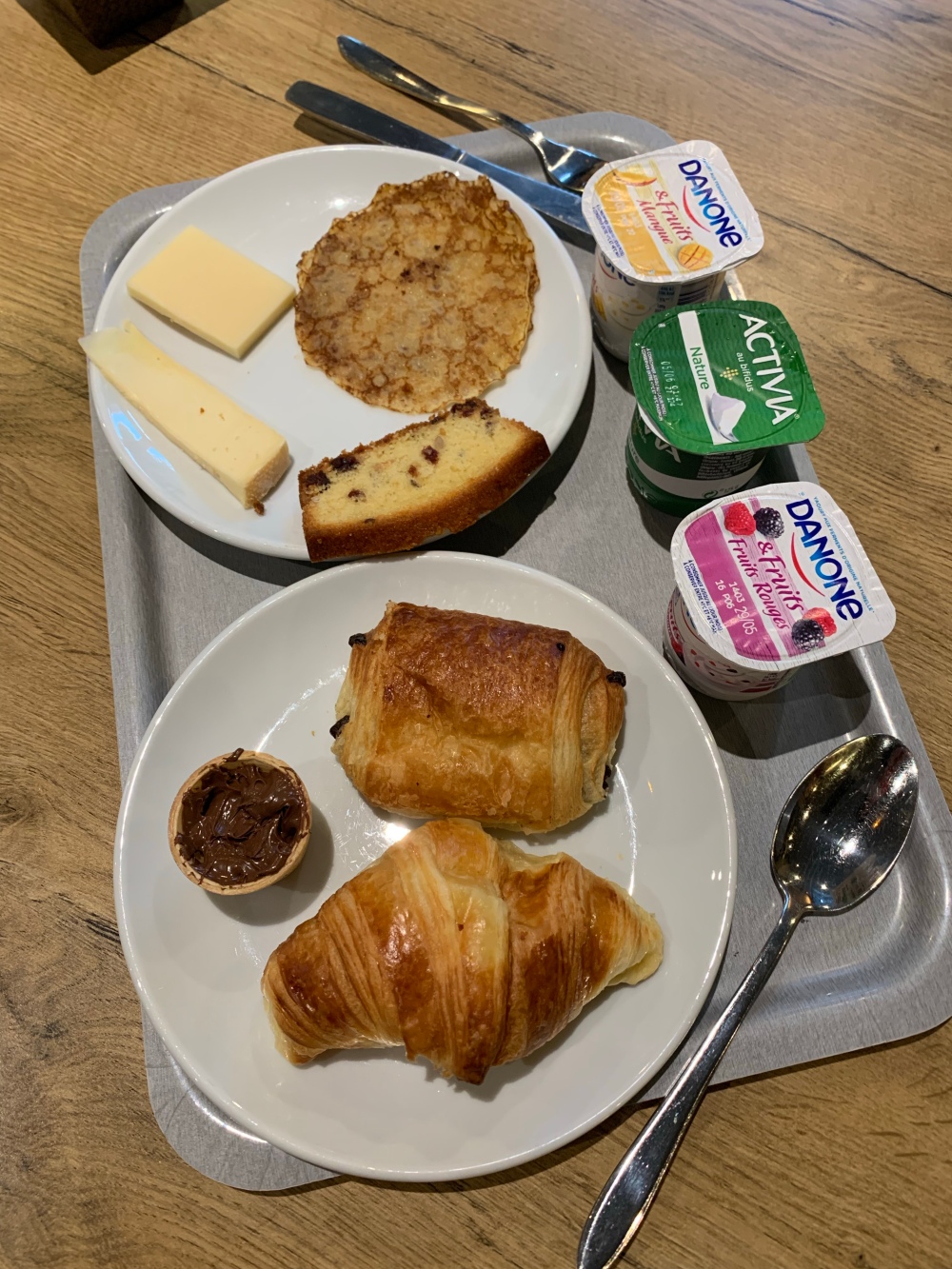 As my return bus to Germany was scheduled at 12:30pm, I decided to not go anywhere far and explored the surrounding areas only.

While returning, I decided to take an Uber and the driver was not adept at speaking English. He was not able to understand the location of Bercy Seine and we had to stop at a location higher than the underground bus station. Additionally, he didn’t have change and he was not ready to accept extra Euros, so I had a pretty difficult time explaining to him that I’ll miss my bus if he does not accept. In the end, I had to resort to Google translate so that he understands my point and lets me go – yes he was not even ready to let me go!

When I finally found the bus, I breathed relief that at least in Germany, I did not have such experiences previously and prayed that the rest of my time goes well.

The journey through the roads of Paris and then through a Belgium was peaceful and relaxing. My adjacent seat was taken by an Indian lady working in Germany as an engineer. We talked a lot and it felt good to converse with someone from India.

But that does not mean that I hate Paris. I should have planned my stay and trips in a better way and with someone. A solo escapade in Paris can turn out to be nightmare rather than a brave act.